Forty-five miles (70 kilometers) southeast of Mexico City – and the old Aztec capital of Tenochtitlan – stand the two great sacred mountains of Popocatepetl and Iztaccihuatl. In Nahuatl, the language of the Aztecs, Popocatepetl means ‘Smoking Mountain’ and the 17,833 feet (5452 meter) volcano, while currently dormant, does frequently emit large clouds of smoke.

Adition/relation to article by Stijn van den Hoven: this is the volcano that lies directly behind the pyramid of cholula. http://journeywonders.com/travel-cholula-pyramid/ I believe pyramids are moddeled based on volcano’s, or the primordial mounts. Pyra-mid  “Fire in the middle”

Iztaccihuatl, meaning ‘Sleeping Lady’ or ‘White Lady’ in Nahuatl, is an extinct volcano rising to 17,388 feet (5286 meters). Numerous shrine ruins, found as high as 12,000 feet on both peaks, show that the mountains served important religious functions for the Aztecs and perhaps earlier cultures. A romantic legend that dates from Pre-Conquest times relates that Popocatepetl, a great warrior, was in love with the fair maiden Iztaccihuatl, daughter of a tribal king. The lovers went to the king who told them he would allow the marriage only if Popocatepetl was victorious in battle with a rival tribe. Popocatepetl went off to battle, was indeed victorious, but was kept away longer than expected. A rival suitor to the hand of Iztaccihuatl spread the rumor that Popocatepetl had died in battle and the young maiden soon died of grief. When Popocatepetl returned he laid her body atop a mountain range that assumed the shape of a sleeping lady – the form that is evident in the western view of the Iztaccihuatl today. Overcome with sadness, Popocatepetl climbed the adjacent peak where, standing sentinel with a smoking torch, he eternally watches over his lost lover.

Legends relate that the Aztec emperor Moctezuma once sent ten of his warriors to climb Popocatepetl to discover the source of the mysterious smoke. The first recorded ascent however, in 1522, seems to have been accomplished by soldiers in the army of Cortez, making Popocatepetl the highest peak climbed by Europeans up to that time. Nowadays, during the winter months when the snow is hard and the skies clear, many climbers scale the towering mountains. In the vicinity of central Mexico are three other sacred mountains including Tlalocatepetl, the abode of the powerful Aztec rain god; Citlaltepetl Orizaba, the tallest peak in Mexico; and Nevada de Toluca.

Rising to 15,106 feet (4604 meters), Cerro Toluca is the fourth highest mountain in Mexico. Within the extinct volcano cone are two lakes. They have been sacred abodes of mythic gods since time immemorial. 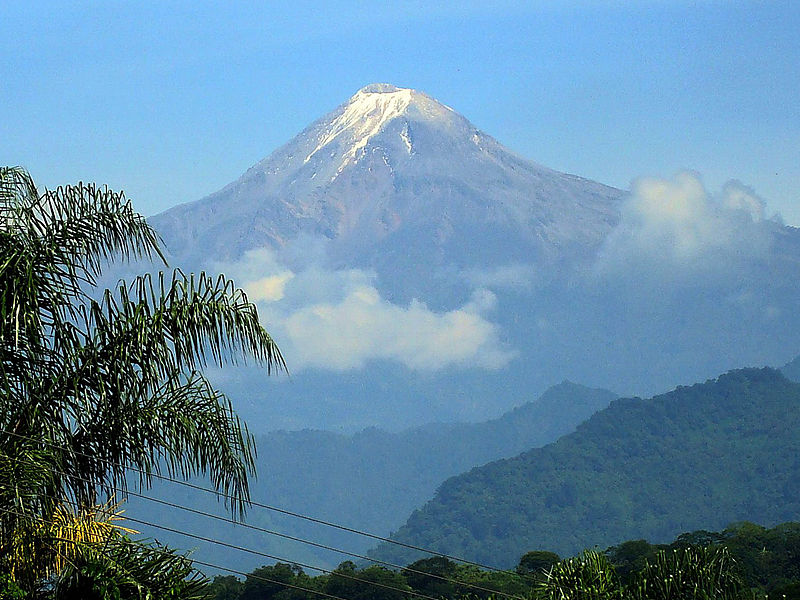 The Pico de Orizaba sometimes known as Citlaltépetl (from Nahuatl citlal(in) = star, and tepētl = mountain), is a stratovolcano, the highest mountain in Mexico and the third highest in North America, after Denali (formerly known as Mount McKinley) of the United States and Mount Logan of Canada. It rises 5,636 metres (18,491 ft) above sea level in the eastern end of the Trans-Mexican Volcanic Belt, on the border between the states of Veracruz and Puebla. The volcano is currently dormant but not extinct, with the last eruption taking place during the 19th century. It is the second most prominent volcanic peak in the world after Africa’s Mount Kilimanjaro.