From Wikipedia, the free encyclopedia

The Ain Dara temple, located near the village of Ain Dara, northwest of Aleppo, Syria, is an Iron Age Syro-Hittite temple noted for its similarities to Solomon’s Temple as described in the Hebrew Bible.[1][2][3] According to the excavator Ali Abu Assaf, it was in existence from 1300 BC until 740 BC and remained “basically the same” during the period of the Solomonic Temple’s construction (1000 – 900 BC) as it had been before,[4] so that it predates the Solomonic Temple.[5] The temples of Emar, Munbaqa, and Ebla are also comparable.[3] The surviving sculptures depict lions and sphinxes (comparable to the cherubim of the First Temple).

Massive footprints are carved into the floor; whether of gods or humans or animals is debatable.[4] Also left to speculation is to whom the temple is dedicated. Ain Dara may have been devoted to Ishtar, goddess of fertility;[6] or dedicated to the female goddess Astarte,[7] or the deity Ba’al Hadad.[8]

Ain Dara temple is located in north Syria, 67 kilometres (42 mi) northwest of Aleppo near the Syro-Turkish border. It was built on a terrace known as the “acropolis of the tell”, a precipitous-faced tell that overlooks the Afrin Valley. The area is divided in two parts, the main tell that is 90 feet (27 m) above the surrounding plain, and the lower acropolis which covers an area of 60 acres (24 ha).[3][4][9]

Just east of the temple site is the modern-day village of Ain Dara. 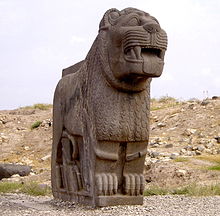 After excavations were done, between 1980 and 1985, its similarities with Solomon’s Temple, described in the Biblical texts though not seen on ground, was discussed by archaeologists and historians. Already the smaller Tell Tayinat temple, discovered during excavations in 1936 and located about 50 miles (80 km) away, had “caused a sensation because of its similarities to Solomon’s Temple.”[3][4]

According to extensive subsequent debate among archaeologists, Ain Dara has numerous similarities with Solomon’s Temple in Jerusalem. Ain Dara, as excavated, has revealed a distinctively similar three-part layout with structural blocks of basalt on limestone foundations. However, it has been conjectured that the temple probably had a mud-brick superstructure covered with wood paneling, which has not survived.[3][4]

Detail of the outer wall of the Ain Dara temple, showing two lions

A courtyard built with sandstones provides approach to the temple. The courtyard is paved with flagstones where a chalkstone basin for ceremonial purposes is seen.[4] The temple, 98 by 65 ft (30 by 20 m) in size, faces southeast.[3][4] Its exterior contains a cherubim relief.[11] The entrance porch, or portico, marked by two basalt piers or pillars, and a wide hall, were not roofed over and were part of an open courtyard. The entrance pillars appear to have architectural and cultic significance.[3] A sphinx and two lions decorate the temple portico flanking the three steps (out of four) made in basalt.

The main sections include the porch, a middle room and an inner room or sanctum. The middle room measures 6 metres (20 ft) by 15.5 metres (51 ft) in size and is lined with lion reliefs, guilloché, and panels resembling window. The square main hall measures 16 metres (52 ft) by 16 metres (52 ft); at the rear end of this hall reliefs and a stele were added as part of shrine. There are basalt reliefs in the lower wall panels. An elevated podium (2.5 feet (0.76 m) high platform), a niche, and a secondary wall are part of the visible remains. In the small shrine area situated at the innermost area of the temple, carved sockets and grooves are seen on the wall,[3] which point to the former presence of a wooden screen. A ramp joins the main room to the platform area and the sanctum. The back wall of the sanctum has a niche which probably housed a statue of a god or goddess.[4] Paved floors and walls reliefs are visible in the multistoried hallways, at least three stories high, that flank three sides of the temple,[3] with at least one southern entrance. Figure-eight lattice patterns are included on two false, recessed windows that were carved into the temple walls.[2] While all these were dated as part of first and second phase creations, material remains unearthed at the site identify additions made in the third phase of construction, an “ambulatory with a series of side chambers on three sides of the temple”. It has also been inferred that these chambers were part of the pre-existing temple platform and not linked to the main temple.[4]

Left: The left footprint (ca. 3ft in length). Right: The right footprint (about 3 ft in length)
The expert said that a persons height is roughly 7 times the length of their foot.(which would make this 21 feet or 7m high person)

A pair of large, bare footprints, each about 3 feet (0.91 m) in length, are carved into the stone floors of the portico, followed by a single footprint carved beyond the first two, and another single footprint carved into the threshold, “marking the deity’s procession into the cella“.[clarification needed] [4][8][9] It is also conjectured[who?] that these foot prints could be of unidentified “immense clawed creatures”.

The inference[according to whom?] is that the right footprint seen on the threshold, which is spaced at about 30 feet (9.1 m) from the first footprint, could be of human or goddess, 65 feet (20 m) in height.

It has also been noted[according to whom?] that the deities in all the Ain Dara temple reliefs have “shoes with curled-up toes”. Hence, the source of the footprints, whether of gods or humans or animals, is debatable.[4]

Note that the Yuga cycles speak over the height of man.

In the present days we live in a Kali Yuga, which began at 3102 BCE[1] with the end of the Mahabharata war. This date is also considered by many Hindus to be the day that Krishna left Earth.[note 2] 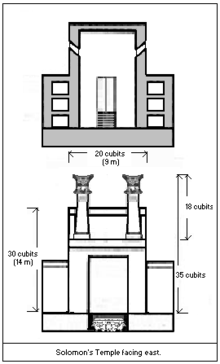 There are many features in common with Solomon’s Temple as described in the Book of Kings. The layout of Dara is similar to that of the Biblical temple, which was also of a long room plan with the three room configuration of a portico at the entrance followed by the main chamber with the shrine. The difference is in the antechamber, which is an add-on in the Ain Dara temple. The size of the Solomon temple was 120 feet (37 m) by 34 feet (10 m) while that of the Ain Dara is 98 feet (30 m) long by 65 feet (20 m) wide without side chambers. Other similarities include: location on a high raised site overlooking a city; erected on a raised platform, with a narrow portico and a roof supported on pillars flanked by reliefs on the walls, and carvings of similar motifs; and the raised podium. In brief, 33 of the architectural elements found in Ain Dara are tallied with 65 of the features mentioned in the Biblical description of Solomon’s Temple.[4][12]