By a friend on facebook:  “Clearly the remnants of another colony of the previous worldwide civilisation – the site looks cruder than most other megalithic sites, but it is certainly because the stones used there are limestone blocks, which got heavily corroded over time. A “trained eye” will easily notice the same polygonal masonry that is seen in other megalithic sites. Keep in mind that all masonry works from these builders most probably had the same level of finesse, which nowadays can only be observed on walls that were made with stones that are much less vulnerable to acid rains, like, for example, the andesite and porphyry walls in Peru.”

This technique is found throughout the Mediterranean and sometimes corresponds to the less technical category of Cyclopean masonry.[2]

In Italy it is particularly indicative of the region of Latium, but it occurs also in Etruria, Lucania, Samnium, and Umbria; scholars including Giuseppe Lugli have carried out studies of the technique.[3][4] Some notable sites that have fortification walls built in this technique include Norba, Signia, Alatri, Boiano, Circeo, Cosa, Alba Fucens, Palestrina, and Terracina.[5]

View of a polygonal masonry wall at Rusellae, Italy

A detail of the polygonal masonry bastion flanking the Porta Maggiore.

The so-called Porta Rosa of the ancient city of Velia employs a variant of the technique known as Lesbian masonry.[1]

This technique is found throughout the Mediterranean and sometimes corresponds to the less technical category of Cyclopean masonry.[2]

The term comes from the belief of classical Greeks that only the mythical Cyclopes had the strength to move the enormous boulders that made up the walls of Mycenae and Tiryns. Pliny’s Natural History reported the tradition attributed to Aristotle, that the Cyclopes were the inventors of masonry towers, giving rise to the designation Cyclopean.[1]

The walls are usually founded in extremely shallow beddings carved out of the bedrock. ‘Cyclopean’, the term normally applied to the masonry style characteristic of Mycenaean fortification systems, describes walls built of huge, unworked limestone boulders which are roughly fitted together. Between these boulders, smaller hunks of limestone fill the interstices. The exterior faces of the large boulders may be roughly hammer-dressed, but the boulders themselves are never carefully cut blocks. Very large boulders are typical of the Mycenaean walls at Mycenae, Tiryns, Argos, Krisa (in Phocis), and the Athenian Acropolis. Somewhat smaller boulders occur in the walls of Midea, whereas large limestone slabs are characteristic of the walls at Gla. Cut stone masonry is used only in and around gateways, conglomerate at Mycenae and Tiryns and perhaps both conglomerate and limestone at Argos.[2]

Outdated definitions of the Cyclopean style

While Peck’s first and possibly second and third styles conforms to what archaeologists today would classify as cyclopean, the fourth now is referred to as ashlar and is not considered cyclopean. There is a more detailed description of the Cyclopean styles at the Perseus Project.[5]

In some Masonic groupings, which such societies term jurisdictions, ashlars are used as a symbolic metaphor for progress. As described in the explanation of the First Degree Tracing Board, in Emulation (and other) rituals the rough ashlar is a stone as taken directly from the quarry, and allegorically represents the Freemason prior to his initiation; a smooth ashlar (or “perfect ashlar”) is a stone that has been smoothed and dressed by the experienced stonemason, and allegorically represents the Freemason who, through education and diligence, has learned the lessons of Freemasonry and who lives an upstanding life.[6] 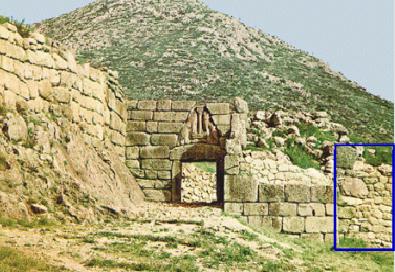 Difference between Cyclopean masonry, shown in the blue rectangle, and ashlar masonry, outside the rectangle (the Lion Gate, Mycenae, 13th century BC)

Pausanias described the Cyclopean walls of Mycenae and Tiryns:

There still remain, however, parts of the city wall [of Mycenae], including the gate, upon which stand lions. These, too, are said to be the work of the Cyclopes, who made for Proetus the wall at Tiryns. (2.16.5) Going on from here and turning to the right, you come to the ruins of Tiryns. … The wall, which is the only part of the ruins still remaining, is a work of the Cyclopes made of unwrought stones, each stone being so big that a pair of mules could not move the smallest from its place to the slightest degree. Long ago small stones were so inserted that each of them binds the large blocks firmly together.(2.25.8)

Modern archaeologists use “Cyclopean” in a more restricted sense than the description by Pausanias; while Pausanias attributes all of the fortifications of Tiryns and Mycenae, including the Lion Gate, to the Cyclopes, only parts of these walls are built in Cyclopean masonry. The photograph above shows the difference between Cyclopean masonry (shown in the blue rectangle), and the ashlar masonry of the Lion Gate.

Apart from the Tirynthian and Mycenaean walls, other Cyclopean structures include some tholos tombs in Greece and the fortifications of a number of Mycenaean sites, most famously at Gla.

In Sicily there are many Cyclopean structures especially in the eastern part of the island.[citation needed]

The Nuraghe of Bronze Age Sardinia also are described as being constructed in cyclopean masonry, as are some of the constructions of the Talaiotic Culture abounding on Menorca and present to a lesser extent on Mallorca.[citation needed]